It was the most eventful game of BATC 2017. The Falcons and the Cavaliers battling it out on thursday for the second spot in the BATC final. The Cavaliers with their powerhouse lineup the heavy favourites to walk away with the game against the Falcons who lost all 3 of their round robin games. It turned out to be different. The Falcons took a quick 5-0 lead when the Cavaliers came pressing back in the 4th inning. Tygo Rojer shut the Cavs offense down, allowing only 6 baserunners into the 5th inning. The Falcons led 5-2 into the sixth inning when the Cavaliers rallied for their last chance. Darnel Collins homered to lead off the inning off Jakob Boldt. The next hitter reached on an error, bringing the tying run to the plate with no outs. Axl Weyn doubled to right and brought the tying run to 2nd base with no outs. The next hitter hit a deep fly ball that was caught by left fielder Bruno 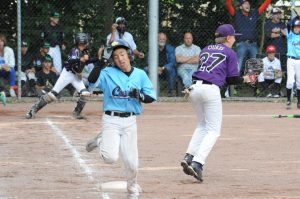 Kramer, scoring only 1 run. 1 out, third base occupied. The next batter Jessy Castien struck out on Jakob Boldt’s fireballs. 2 outs! Thomas Ho came up to the plate next and connected the first fastball he saw sharply to the shortstop Lowe Jellnor. Out of nowhere came that backhand stretching stop followed by a strike to first base for the final out, stunning everybody that witnessed it. The Falcons pulled it off, straight into the final, leaving the Cavaliers baffled with the loss. A really dramatic and heroic end to the game.

“That is the spirit I like to see my Falcons play in. Resilient, never giving up until the last out. It’s all about effort and teameffort.” Falcons manager Brandon Rijnbergen recalls the magic stretch of that thursday that brought his beaten team into the final. “That’s how we penciled it out, standing up for eachother and fight till the end. That day made me a proud coach and more than that: it was a joy to see the kids explode into ecstacy. And yes, I want more of that in 2018. Looking forward to it already.” 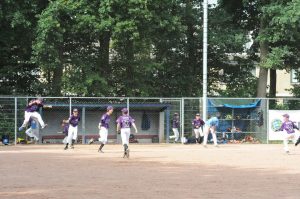 “Well, that game defined our tournament to the max. Tense games, kids giving it all. Not only the winning team, but also the teams on the losing end fight for their honour. And when kids give it all and enter their playground, the best things happen. Just like that game. A classic Battle at the Castle. Brandon Rijnbergen brings a great spirit to his teams. Everybody sees his love for the game, his positive tenure and effort to build his players into resilient Falcons. We are very happy Brandon commits to the Falcons for 2018.”

Brandon Rijnbergen is no stranger to BATC Baseball. He was one of the first assistants of Kenneth Johnson’s Bombers and jumped to the Falcons’ steering wheel when Coen Merkx was unable to lead the Falcons in 2017. His overall record as a manager is 2-5, but already has one final under his belt. More to come in 2018?