It marked the first time in BATC history that one manager wins back to back titles. Bart Janssen and his crew did just that in 2016 and 2017. Both years in dramatic fashion with absolutely thrilling finals. Coach Janssen has his way to manage his teams and crews. His love for the game of baseball, his experience as a Dutch hoofdklasse catcher and his ability to work with young players seem to work excellently at BATC Baseball. In one way or another, he seems to be able to draw the best out of his players in crucial games.

Paul Bun on the return of Coach Janssen: “We are very happy that we can bring a true ambassador of the tournament back to lead the Vikings again in 2018. His joy and leadership skills make him a pleasure to watch and fun to play for as a Viking player. That’s how we like our team managers.” 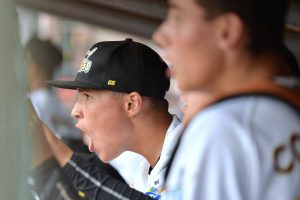 Bart Janssen: “Well, it has been fun the last two years and I was able to build great teams together with Anthony Vrolijk and Deante Johnson. Sign me up was my first thought for the upcoming 2018 tournament. The Vikings way will not change: It’s not the team with the best players that win. It’s the players with the best team that wins.”

The staff will be partly reunited with Anthony Vrolijk returning to the squad. Aram van der Wal will complete the Vikings leadership for 2018. The team with the best BATC record with 9 wins and 4 losses will be back fearlessly hunting for the title. Can they do it again?