An exciting evening we had. After opening the registrations on january 1st of every year BATC Draft day is gaining interest as one of the big events of every Battle at the Castle tournament. The registrants put time in making a recruitment video, showing off their skills and trying to lure managers to pick them in their team. Kids and parents become nervous, will they be picked by one of the team managers and will their participation be confirmed already on this day, or do we need to wait a little longer? It not only is an extra fun part for the Battle at the Castle managers, it is also a learning experience for the players. Dealing with positive pressure as one of the drafted players, but also coping with a dissappointment when you expect to be picked and you aren’t. We all learn during this first stage of Battle at the Castle Baseball.

It was a very interesting draft. The managers took on a very international group of players. In the U12 tournament we saw players from The Netherlands, Belgium, France, Germany, Sweden, Czech Republic, Austria and Curacao. A lot of players from national teams or previous years BATC Allstars were in the mix.

Jamie Beerman of Amsterdam Pirates was picked first overall by the Bombers. He is regarded highly talented and a good teamplayer by all BATC Managers. The first round was completed with two other Dutch National team players Amarensio Franka and Otis Ward going to the Cavaliers and Admirals. Lowe Jellnor completed the first round, returning to the Falcons.

The U15 draft was just as spectaculair as the U12 draft. A lot of international players will make their way back to Oosterhout to compete with all their new teammates in a competitive although friendly environment. A lot of national team players were drafted as well as former BATC Allstars. 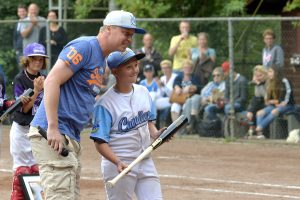 Marco Lopez Esser, the 2016 U12 MVP, was picked first overall by the Emperors. He will come over from Spain again, although he plays in Virginia Highschool league this spring. Yurian Croes, Brandon Herbold and Finn Kragt completed the first round of picks. A lot of national teamplayers again and notable was the first ever player from Belarus will play at Battle at the Castle baseball: Platon Pazharytski.

The rosters will be completed to 14 / 15 players in the coming weeks based on the draft lists of the managers with the ultimate goal to even out all teams in strength to have the classic action packed and tense games at the 2018 tournament.

The results of the U12 Draft:

The results of the U15 draft: