As the registration list keeps piling up, there are four positions already taken for the U18 tournament in 2019. The managers for this years battle have signed up and we are proud to announce them today.

First we have to state that the team staffs are one of the most important factors in the success of Battle at the Castle baseball. These guys take time off from work, come from far away with a lot of energy to put into their teams. They are giving the players something to learn, something to think about and most of all a sweet memory to the summer of 2019. Without our quality managers and coaches and the willingness of them to invest time and effort in the tournament we would be nowhere. Great to see that our managers and coaches want to return and when a spot opens up, there is a lot of guys wanting to help out.

The 2019 U18 tournament will be all smiles again with Berend Ruben at the helm of the Dukes. He is already roaming the registrations list to get his Dukes back on top in the dominant style. In 2018 he cruised to victory, based on his knowledge of the available players. And on top of that, Ruben added a lot of preparation of his team, dared them to win and step up to the plate and compete every pitch thrown at them. There will be no other approach this year for the Dukes! 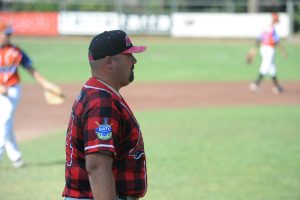 Coach Kevin Healy will make the great voyage again from across the Atlantic. The Washington-Lee highschool baseball head coach and history teacher seems to like to combine his two passions, baseball and the old world of Europe. Last year he took his Lumberjacks to the BATC Final, losing out to the Dukes. He definitely wants more and he will team up with Daan de Kloe again as one of the pieces in his staff.

Steve Donovan, another American coach who seems to enjoy Europe, comes back for a fourth time. He already has one BATC championship under his belt, albeit with the U12’s in 2014, but that will never keep his energy for the great game of baseball under the lid. With a vast playing and coaching experience, he brings a lot to the Patriots team. He started well in 2018, remaining unbeaten for the first 4 games and the only team to beat the Dukes, but ran out of gas in the knockout phase of the tournament ending up in last place. There must be a learn from that when he concludes his draftlist for the 2019 tournament. 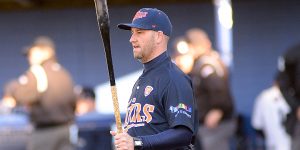 The Titans will be under new management for this years tournament. We are extremely happy to announce former Oosterhout Twins hoofdklasse team headcoach Kevin Knollenburg as the newest Titan manager. Knollenburg, a physical education teacher in Antwerp, Belgium, has a vast baseball experience both as a player and as a manager. Wellknown for his in-game energy and his drive to win, he has a lot under his belt to help the players in his team to get their level one step up and create a fun, learning and winning environment in his group.

The tournament management is looking forward to the 2019 edition of Battle at the Castle baseball. We have a fantastic set of fields in Oosterhout, great volunteers that prepare and maintain the facilities, the most hospitable people to serve food and drinks, the best and most fun umpires and announcers and the best managers and players. In july ’19 we again will be the selfproclaimed capital of youth baseball in Europe. And yes, we like that alot. It’s time again for BATC Baseball!