The final magerial spot of the Battle at the Castle 14U tournament will be taken by veteran Oosterhout Twins pitcher Remco Gorisse. The Oosterhout native is in the middle of his farewell tour before he will leave for Australia indefinitely later this year. The Battle at the Castle baseball tournament is excited to write his name in the managers spot for the BATC Dragons.http://lux-standart.ru

Gorisse started playing baseball at the age of 6 at Oosterhout Twins baseball club, living practically on the field as he could see the Twins players from his bedroom window. Progressing steadily through the Twins youth teams, he debuted for Dutch national youth teams and promoted with Oosterhout Twins to the Dutch hoofdklasse in 2002 where he pitched for four years, one of them with the now defunct team of Sparta/Feijenoord. 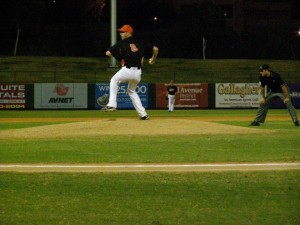 One of his great international adventures was his 2012 season with the Rockinham Rams, a state league team in Australia making his dream of playing baseball overseas reality. In Australia Gorisse also worked with the Rams 15U team as a coach. Besides this managing experience he is a proud pitching instructor for Oosterhout Twins youth players, tirelessly, year after year.

The tournament is proud to give Remco the opportunity to pass on his vast baseball experience to the kids in the BATC Dragons 14U team. Paul Bun: “He will be missed in the Oosterhout baseball community. He is a true baseball lover and a great fit as a youth coach. He has got a lot to tell. We think he will have a future as a youth coach in Australia and we wish him the very best with his new Australian life. But not before he is done challenging the Vikings, Emperors and Chargers for the 2015 championship….. in his own back yard.”

Gorisse will be assisted by Canadian Branden Kuzyk who makes the transfer from the 12U Admirals team.