The first games of the double elimination round were classics all along. In the first game the Dragons showed off their pitching. Despite being outhit by the Emperors, they still won the game due to taking 7 walks from the Emperors pitching and making only 2 errors defensively. The Dragons have their pitching fresh for tomorrows clash with the Chargers who upset the Vikings with a 4-3 win. The Vikings had not lost a game yet in the tournament, but they bumped into a red hot Darnel Collins today. He homered twice and closed out the game perfectly. Pitching was strong in that game from both sides. Herb 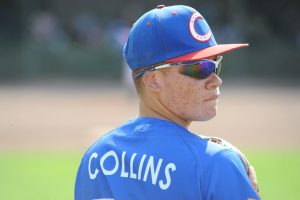 old and Kragt had a great duel going, but the relief pitching from Korbijn (VIK) and Devreese and Collins (CHA) was on point as well. 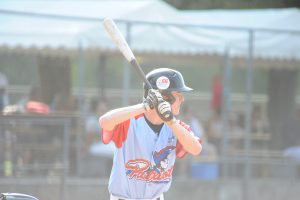 In the U18 tournament we saw the Dukes having one big inning that took down the Lumberjacks. In the 4th inning the Dukes scored 5 to jump from 3-1 down to 6-3 up. Marnix Ruben went 5 innings for the win before Casimiri took the hill for the final 2 frames to shut the Lumberjacks offense down. The Patriots – Titans game looked to be in the books in the 7th inning. Postelmans dominated into the 7th inning. After 6.1 innings he allowed only four hits and struck out 8 and left the game with a 7-1 lead, one out and a runner on second. The Patriots jumped on the opportunity, highlighted by a bases loaded double by Tijmen Stark that capped a 6-run inning for the Patriots. Drama struck in the bottom of the 8th for the Titans where Van Zwieten walked, Boxelaar got hit when trying to bunt Van Zwieten over. Van Gool then bunted but the Titans failed to get him out, ending up in a bases loaded jam that gave Van Hevel the chance to line into rightcenter for the walkoff. Already the 3rd houdini-act by the Patriots that seem to lure their opponents in a late inning trap to win by 1 run.

U18 schedule tomorrow on Score66 Arena: 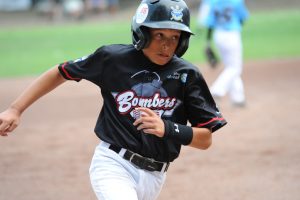 In the U12 tournament there were two upsets. The Bombers beat the Cavaliers 13-6 behind a 6 hit attack by Leandro Salazar Mata and Jamie Beerman. They drove the Cavaliers pitching insane. Bombers pitching was very much on point, allowing just 6 hits and 1 walk during the game. All-in-all a decent win by a bunch of great kids. The Cavaliers came out of the first round as a favourite for the final, they now will have to win twice tomorrow to reach the final. In the late afternoon game the Admirals showed off their progress. Bumped in the first 2 games, they seem to get their game together and start playing like the feared green machine of 2017. The Admirals tallied 9 hits and pitched their way out of jams with Bruno Kramer, Kimi Verkruijssen and Otis Ward dealing on the mound. The Falcons also appeared one of the favourites for a tournament win, but it totally turned around. Every team won 2 and lost 2 games now, so who can predict the outcome of BATC 2018 now? Tomorrow morning the Admirals or Bombers will secure a berth in the final, that’s for sure.

U12 Schedule for tomorrow on Esri Park